The 4-film collection is coming to Blu-ray in March.

In an early announcement to retailers, Lionsgate is preparing 'Wishmaster Collection' for Blu-ray on March 28.

Magically powerful and supernaturally evil, the ancient entity known as the Djinn can grant your wildest dreams — and unleash your darkest nightmares. Follow the Wishmaster’s bloodcurdling quest to devour souls and plunge the world into eternal damnation in this fright-filled collection of all four horror-fantasy favorites.

You can find the latest specs for 'Wishmaster Collection' linked from our Blu-ray Release Schedule, where it's indexed under March 28. 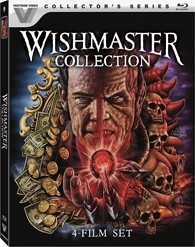 Discs mentioned in this article: (Click for specs and reviews)
Wishmaster Collection (Blu-ray)