The story behind the 90s rock band will be revealed on Blu-ray in December.

In an early announcement to retailers, Lionsgate is preparing 'Oasis: Supersonic' for Blu-ray on December 20.

From the Oscar winning producers of 'Amy' comes this essential and entertaining look at the meteoric rise of the seminal 90s rock band Oasis.  The film immerses us in the raucous rock stars’ fast-paced world of electrifying music, wild debauchery, and epic fraternal feuding, weaving never-before-seen concert footage with candid interviews and an astonishing firsthand account of the backstage sibling rivalry that threatened to destroy the band.

You can find the latest specs for 'Oasis: Supersonic' linked from our Blu-ray Release Schedule, where it's indexed under December 20. 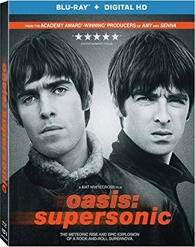 Discs mentioned in this article: (Click for specs and reviews)
Oasis: Supersonic (Blu-ray)