Lionsgate Prepping 'Little House on the Prairie: Season Four' for Blu-ray in January

The Ingalls family returns to Blu-ray in the new year. Pre-order your copy here.

In an early announcement to retailers, Lionsgate says 'Little House on the Prairie: Season Four' will arrive on Blu-ray on January 20.

The adventure and drama continues for the beloved Ingalls family in Season Four of this treasured American-classic TV series. Life on the frontier brings trials and triumphs in this 22-episode season that includes a disappointing trip to Chicago, a devastating drowning followed by Laura's kidnapping, crime and outlaws in Walnut Grove, love and marriage for Nellie, a surprise family inheritance, Caroline's pregnancy, Mary's tragic blindness and more. Newly restored and remastered for optimal picture and sound, enjoy each episode in its original brilliance, and relive every touching moment of this unforgettable season.

The 5-disc set will feature 1080p video, a lossless stereo soundtrack, and supplements will include "The Little House Phenomenon Part Four: A Day in the Life of Little House" Documentary as well as Ultraviolet Digital Copies of every episode.

You can find the latest specs for 'Little House on the Prairie: Season Four' linked from our Blu-ray Release Schedule, where it is indexed under January 20. 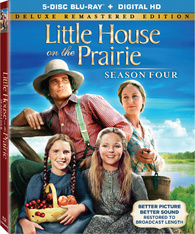