The romantic comedy is heading to Blu-ray in July.

In an early announcement to retailers, Lionsgate is preparing 'The Perfect Match' for Blu-ray on July 19.

Charlie (Terrence J) is a bachelor who's convinced that relationships are dead despite attempts by his therapist sister (Paula Patton) and his friends to tell him otherwise. On a bet, he decides to stay with one woman for one month to prove that he is immune to love. Soon, he meets the beautiful and mysterious Eva (Cassie Ventura) and coaxes her into a casual affair. But as Charlie spends more time with Eva, he begins to question whether he may actually want more than just a one-night-stand.

The Blu-ray will feature 1080p video, a DTS-HD MA 5.1 soundtrack, and supplements will include: "Making The Perfect Match" Featurette; "What's Love Without Comedy" Featurette; "Nobody's Perfect" Featurette; and Chillin' with the Perfect Cast - Cast & Director Commentary.

You can find the latest specs for 'The Perfect Match' linked from our Blu-ray Release Schedule, where it's indexed under July 19. 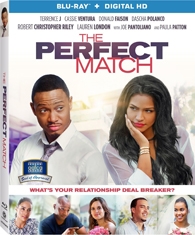 Discs mentioned in this article: (Click for specs and reviews)
The Perfect Match (Blu-ray)