Lionsgate Details 'The DUFF' for Blu-ray

The comedy starring Mae Whitman, Bella Thorne, and Robbie Amell will arrive on Blu-ray in June. You can pre-order the movie here.

In an early announcement to retailers, Lionsgate is preparing 'The DUFF' for Blu-ray on June 9.

Bianca (Mae Whitman) is a content high school senior whose world is shattered when she learns the student body knows her as 'The DUFF' (Designated Ugly Fat Friend) to her prettier, more popular friends (Skyler Samuels & Bianca Santos). Now, despite the words of caution from her favorite teacher (Ken Jeong), she puts aside the potential distraction of her crush, Toby (Nick Eversman), and enlists Wesley (Robbie Amell), a slick but charming jock, to help reinvent herself. To save her senior year from turning into a total disaster, Bianca must find the confidence to overthrow the school's ruthless label maker Madison (Bella Thorne) and remind everyone that no matter what people look or act like, we are all someone's DUFF.

You can find the latest specs for 'The DUFF' linked from our Blu-ray Release Schedule, where it's indexed under June 9. 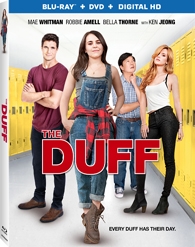 Discs mentioned in this article: (Click for specs and reviews)
The DUFF (Blu-ray)