The fantasy drama film is now available for pre-order.

In an early announcement to retailers, Lionsgate is preparing 'The Age of Adaline' for Blu-ray on September 8.

Blake Lively is captivating as Adaline, a 29-year-old who survives a near-death experience and from that day on, never grows older. Adaline guards her secret and her heart for eight decades until a charming philanthropist (Michiel Huisman) and his parents (Harrison Ford and Kathy Baker) force Adaline to confront her destiny in this unforgettable tale about the timeless power of love.

You can find the latest specs for 'The Age of Adaline' linked from our Blu-ray Release Schedule, where it's indexed under September 8. 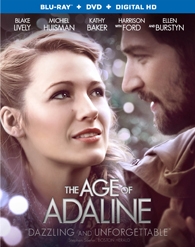 Discs mentioned in this article: (Click for specs and reviews)
The Age of Adaline (Blu-ray)