Thomas Jane and Laurence Fishburne will go head to head on Blu-ray in April.

In an early announcement to retailers, Lionsgate is preparing 'Standoff' for Blu-ray on April 12.

Carter (Thomas Jane), a troubled veteran gets a chance at redemption by protecting a 12 year-old girl from a deadly assassin (Laurence Fishburne) after she witnesses a murder. Holding a shotgun with a single shell, he engages in physical and psychological warfare in a desperate fight for the girl's life.

The Blu-ray/Digital HD combo pack will feature 1080p video and a DTS-HD MA 5.1 soundtrack. No supplements have been detailed at this time.

You can find the latest specs for 'Standoff' linked from our Blu-ray Release Schedule, where it's indexed under April 12. 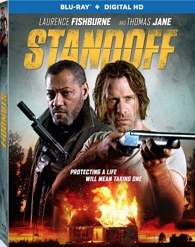 Discs mentioned in this article: (Click for specs and reviews)
Standoff (Blu-ray)