The fifth season of the classic series is coming to Blu-ray in April. Pre-orders are now live.

In an early announcement to retailers, Lionsgate is preparing 'Little House On The Prairie: Season Five' for Blu-ray on April 14.

Follow your favorite frontier family as they move from Walnut Grove to be closer to Mary's school for the blind, and experience every exciting adventure from season five of this much-loved TV series. Relive the heartwarming moments when orphan Albert wins Charles' heart, when Mary conquers doubts about becoming a wife and mother, when the townspeople return to restore Walnut Grove and when Laura and Albert help a dying friend realize his dream.

The Blu-ray will feature 1080p video, a DTS-HD MA 2.0 soundtrack, and supplements will include "The Little House Phenomenon - Part 5: Stories to Remember."

You can find the latest specs for 'Little House On The Prairie: Season Five' linked from our Blu-ray Release Schedule, where it's indexed under April 14. 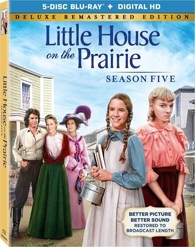 Discs mentioned in this article: (Click for specs and reviews)
Little House On The Prairie: Season Five (Blu-ray)