The action sequel is now up for pre-order.

In an early announcement to retailers, Lionsgate is preparing '12 Rounds 3: Lockdown' for Blu-ray on December 22.

Detective Shaw returns to active duty after the death of his partner. When he uncovers evidence linking his fellow officers to a murder, they frame him for a homicide he didn't commit. Trapped in his own precinct, Shaw will do whatever it takes to expose the dirty cops and clear his name. With twelve rounds in the clip and one shot at redemption, nothing will stand in Shaw's way in this action-packed thriller.

The Blu-ray will feature 1080p video, a DTS-HD MA 5.1 soundtrack, and supplements will include: "Resourceful Adversary" Featurette and "Filming a Firefight" Featurette.

You can find the latest specs for '12 Rounds 3: Lockdown' linked from our Blu-ray Release Schedule, where it's indexed under December 22. 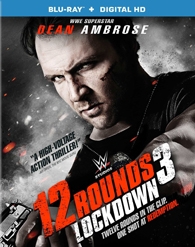 Discs mentioned in this article: (Click for specs and reviews)
12 Rounds 3: Lockdown (Blu-ray)