Director Paul Schrader's mystery thriller is heading to Blu-ray in February. You can pre-order the disc here.

In an early announcement to retailers, Lionsgate is preparing 'Dying of the Light' for Blu-ray on February 17.

Academy Award winner Nicolas Cage ignites a powder keg of action in this electrifying cloak-and-dagger thriller. Evan Lake (Cage), a veteran CIA agent, has been ordered to retire. But when his protégé (Anton Yelchin) uncovers evidence that Lake's nemesis, the terrorist Banir (Alexander Karim), has resurfaced, Lake goes rogue, embarking on a perilous, intercontinental mission to eliminate his sworn enemy.

You can find the latest specs for 'Dying of The Light' linked from our Blu-ray Release Schedule, where it's indexed under February 17. 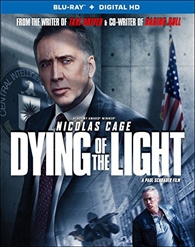 Discs mentioned in this article: (Click for specs and reviews)
Dying of The Light (Blu-ray)