The drama starring Sasha Lane, Shia LaBeouf, and Riley Keough is coming to Blu-ray in December.

In an early announcement to retailers, Lionsgate is preparing 'American Honey' for Blu-ray on December 27.

An astonishing portrait of youth on the American fringe, American Honey is told through the eyes of a vivacious teenage rebel who joins a group of fellow misfits hustling and partying their way across the country. Bursting with electric, primal energy, American Honey is an immersive, exhilarating odyssey of heartbreaking beauty — a generation-defining film that celebrates the defiant resilience of youth in pursuit of the American Dream.

The Blu-ray will feature 1080p video, a DTS-HD MA  5.1 soundtrack, and supplements will include "Sasha Lane and Riley Keough on American Honey" Interview.

You can find the latest specs for 'American Honey' linked from our Blu-ray Release Schedule, where it's indexed under December 27. 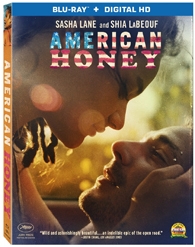 Discs mentioned in this article: (Click for specs and reviews)
American Honey (Blu-ray)