The eighth season of the family drama is coming to Blu-ray in March.

In an early announcement to retailers, Lionsgate is preparing 'Little House on the Prairie: Season Eight' for Blu-ray on March 22.

Whoa, there’s a new Nellie in town! Experience the Olesons’ adoption of Nancy, and every endearing moment of season eight of this epic series, with restored and remastered picture and sound. Follow Charles and Mr. Edwards as they search for answers after the death of Mr. Edwards’s son; share memories with the Wilders and Ingalls when snowed in at Christmas; witness Almanzo’s stroke and the birth of baby Rose; and behold Charles’s faith as he pleads for his adopted son’s life in this completely uncut and unforgettable 22-episode saga.

You can find the latest specs for 'Little House on the Prairie: Season Eight' linked from our Blu-ray Release Schedule, where it's indexed under March 22. 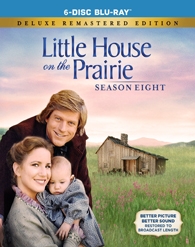 Discs mentioned in this article: (Click for specs and reviews)
Little House on the Prairie: Season Eight (Blu-ray)