Craig Johnson's 2014 dramedy is bound for Blu-ray in December. You can pre-order the Blu-ray here.

In an early announcement to retailers, Lionsgate says 'The Skeleton Twins' is bound for Blu-ray on December 16.

The Skeleton Twins follows Maggie (Wiig) and Milo (Hader), two estranged twins that are reunited after ten years of being apart. With an irresistible mix of humor and heart and a stellar supporting cast, the film follows unforgettable journey to reconnect, as they realize that the key to fixing their lives may just lie in repairing their relationship.

You can find the latest specs for 'The Skeleton Twins' linked from our Blu-ray Release Schedule, where it is indexed under December 16. 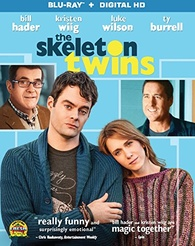