The western starring Liam Hemsworth and Woody Harrelson is headed for Blu-ray this August.

In an early announcement to retailers, Lionsgate will be releasing 'The Duel' on Blu-ray on August 23.

A Texas Ranger (Liam Hemsworth) investigates a series of murders in a small town led by a charismatic preacher (Woody Harrelson). However, the routine undercover investigation soon turns personal for the Ranger who must solve the case before he loses everything to the mysterious town.

The Blu-ray will feature 1080p video, a lossless 5.1 soundtrack, and supplements include an audio commentary with director Kieran Darcy-Smith and production designer Toby Corbett.

You can find the latest specs for 'The Duel' linked from our Blu-ray Release Schedule, where it is indexed under August 23. 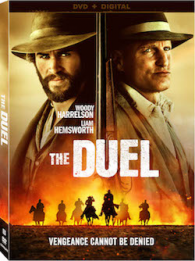