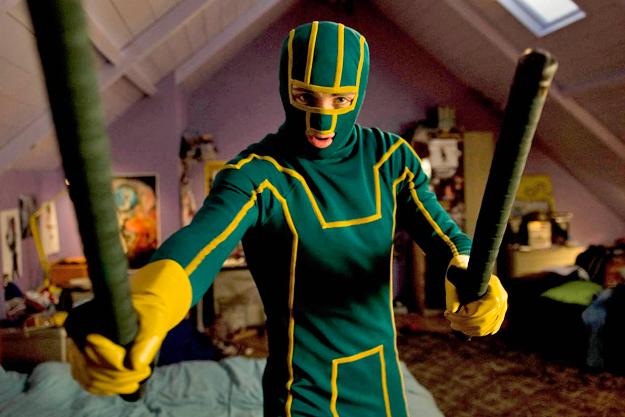 Both catalog titles are expected to hit the 4K format this October.

In an early announcement to retailers, Lionsgate is preparing 'Kick-Ass' for 4K Ultra HD Blu-ray on October 3.

Dave Lizewski (Taylor-Johnson) is an ordinary teenager who goes unnoticed in high school until he takes a chance to "do something" and dons a mask and becomes "Kick-Ass" to fight real-life crime. Bruised and beaten and without any real super powers, he is saved by a father-daughter duo (Cage as "Big Daddy," Moretz as "Hit-Girl") who know all the right moves and have a vendetta against a vicious crime lord, D'Amico (Mark Strong). After a fiery internet storm of publicity for Kick-Ass, D'Amico wants to meet the masked man, and his son (Christopher Mintz-Plasse) dons a costume of his own and becomes "Red Mist" to befriend him and get in his father's good graces. The story comes to a head when D'Amico succeeds in luring the crime fighters to his home and ass-kicking destruction ensues.

The release will feature a Dolby Atmos soundtrack and special features include: "A New Kind of Superhero: The Making of Kick-Ass" 4-Part Documentary; "It's On! The Comic Book Origin of Kick-Ass" Featurette; Audio Commentary with Writer-Director Matthew Vaughn; Marketing Archive; Ass-Kicking Bonus View Mode (Blu-ray Disc Exclusive) – Synchronous with the feature film, this innovative multi-media presentation incorporates video and audio commentary, behind-the-scenes clips and illustrative graphics with Co-Writer/Producer/Director Matthew Vaughn, plus cast and crew providing an all-access perspective on Kick-Ass; and "The Art of Kick-Ass" Gallery.

'Warm Bodies 4K' will also be available on the same date.

A funny new twist on a classic love story, Warm Bodies is a poignant tale about the power of human connection. After a zombie epidemic, R (a highly unusual zombie) encounters Julie (a human survivor), and rescues her from a zombie attack. Julie sees that R is different from the other zombies, and as the two form a special relationship in their struggle for survival, R becomes increasingly more human – setting off an exciting, romantic, and often comical chain of events that begins to transform the other zombies and maybe even the whole lifeless world.

Suggested retail price for each release is $22.99.

You can find the latest specs for 'Kick-Ass 4K' and 'Warm Bodies 4K' linked from our 4K UHD Blu-ray Release Schedule, where they are indexed under October 3.