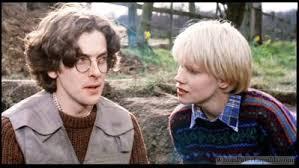 Ken Russell's 'The Lair of the White Worm' Blu-ray Announced

The Vestron Video classic comes to high-definition this January.

In an early announcement to retailers, Lionsgate says 'The Lair of the White Worm' will hit Blu-ray on January 31.

James D'Ampton (Hugh Grant) returns to his country castle in England. Legend has it that James' distant ancestor once slayed the local dragon- a monstrous white worm with a fondness for the sweet flesh of virgins. The young Lord dismisses the legend as folklore, until archaeology student, Angus Flint, unearths a massive reptilian skull and the ancient worship site of a pagan snake god on James' property. When James' virtuous girlfriend, Eve (Catherine Oxenburg), suddenly disappears, he and Angus set out to investigate the foreboding cavern said to be the worm's lair where a centuries-old mystery begins to uncoil.

Specs have yet to be revealed, but supplements include: Two Audio Commentaries: Director Ken Russell, Lisi Russell, in conversation with Film Historian Matthew Melia; 'Worm Food: The Effects of The Lair of the White Worm' featurette; 'Cutting for Ken' an Interview with Editor Peter Davies; 'Mary, Mary' an interview with Actress Sammi Davis; 'Trailers from Hell' featuring Producer Dan Ireland; Theatrical Trailers; and Still Gallery.

You can find the latest specs for 'The Lair of the White Worm' linked from our Blu-ray Release Schedule, where it is indexed under January 31. 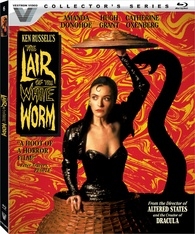