Keanu Reeves is 'Exposed' on Blu-ray

The 2016 crime drama will be available for purchase in March.

In an early announcement to retailers, Lionsgate says 'Exposed' will hit on Blu-ray on March 29.

As a police officer investigates the death of his partner, the case exposes disturbing police corruption along with a dangerous secret that leads him to a troubled young woman. Also starring Christopher McDonald (Happy Gilmore), Big Daddy Kane (Blade: Trinity), and Laura Gómez (Netflix's "Orange Is the New Black").

You can find the latest specs for 'Exposed' linked from our Blu-ray Release Schedule, where it is indexed under March 29. 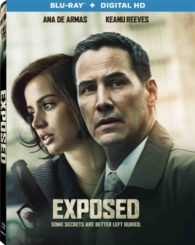