In an early announcement to retailers, Lionsgate will be releasing 'Dear White People' on Blu-ray on February 3.

Loosely based on Simien's own experiences as an undergraduate at a predominantly white university, Dear White People is "a smart, hilarious satire of the Obama age" (Indiewire) and is "the very definition of a conversation-starter" (Los Angeles Times). The provocative subject matter found a voice on Twitter when Simien launched a guerilla marketing campaign and set up a @DearWhitePeople Twitter feed that actually served as a voice for his main character in the film, Sam White. With word of mouth and social media, the guerilla marketing campaign went viral with a concept trailer on YouTube which eventually led the film to be successfully crowdfunded on Indiegogo.

A hilarious and thought-provoking satire about race relations, Dear White People is the story of an eclectic group of black students trying to navigate a predominantly white Ivy League school. Dealing with the college's traditions and cliques is hard enough. But after a sequence of events including a controversial student election, an out-of-control party and the arrival of a reality TV producer, once-quiet Winchester University becomes a hotbed of conflict.

You can find the latest specs for 'Dear White People' linked from our Blu-ray Release Schedule, where it is indexed under February 3. 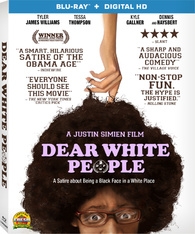