Director Jeff Baena's comedy will arrive on Blu-ray in October.

In an early announcement to retailers, Lionsgate is preparing 'Joshy' for Blu-ray on October 4.

After his engagement suddenly ends, Joshy and a few of his friends decide to take advantage of what was supposed to be his bachelor party in Ojai, California. In their attempt to help Joshy deal with the recent turn of events, the guys turn the getaway into a raucous weekend filled with drugs, booze, debauchery, and hot tubs. Written and directed by Jeff Baena, featuring a score by Devendra Banhart and an ensemble cast of hilarious comedic talents-including Thomas Middleditch (HBO's "Silicon Valley"), Adam Pally (TV's "Happy Endings"), Alex Ross Perry (director of Queen of Earth), Nick Kroll (TV's "The League"), Brett Gelman (TV's "Married") and Jenny Slate (Obvious Child) -Jeff Baena's sophomore feature is a wickedly amusing portrayal of male bonding and emotional incompetence.

Specs have not been detailed yet, but supplements will include Audio commentary with director/writer Jeff Baena, producer/actor Adam Pally and actor Thomas Middleditch.
Suggested list price for the Blu-ray is $19.99.

You can find the latest specs for 'Joshy' linked from our Blu-ray Release Schedule, where it's indexed under October 4. 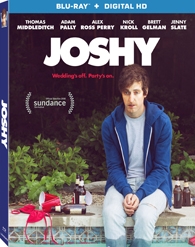 Discs mentioned in this article: (Click for specs and reviews)
Joshy (Blu-ray)