The crooked buddy cop comedy is planned for Blu-ray in April.

In an early announcement to retailers, Lionsgate is working on 'War on Everyone' for Blu-ray on April 11.

Terry (Alexander Skarsgård) and Bob (Michael Peña) are two crooked cops who frame and blackmail criminals all over town. Looking for the ultimate pay-off, they try to extort a strip-club manager (Caleb Landry Jones) and his eccentric, junkie boss (Theo James), but get more than they bargained for when their hair-brained scheme uncovers a bigger, darker secret.

The Blu-ray will feature a 1080p transfer, lossless 5.1 audio, and supplements include Everyone Sounds Off: The Quirky Cast of War on Everyone.

You can find the latest specs for 'War on Everyone' linked from our Blu-ray Release Schedule, where it is indexed under April 11. 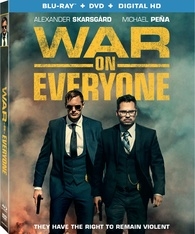