The 1986 sci-fi horror will be getting the Blu-ray treatment in September.

In an early announcement to retailers, Lionsgate will be releasing 'Chopping Mall' on Blu-ray on September 27.

In the film, eight teenagers are trapped after hours in a high tech shopping mall and pursued by three murderous security robots that are out of control.

You can find the latest specs for 'Chopping Mall' linked from our Blu-ray Release Schedule, where it is indexed under September 27. 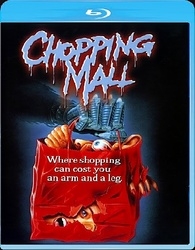