The family holiday comedy arrives on Blu-ray this February.

In an early announcement to retailers, Lionsgate will be releasing 'Love the Coopers' on Blu-ray on February 9.

When four generations of the Cooper clan gather for a reunion, a series of unexpected visitors and unlikely events turn the night upside down-leading the Coopers toward a joyful rediscovery of family bonds and the magic of love.

You can find the latest specs for 'Love the Coopers' linked from our Blu-ray Release Schedule, where it's indexed under February 9. 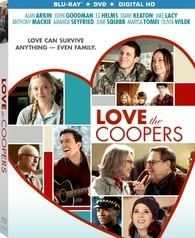