J.C. Chandor's 'A Most Violent Year' Announced for Blu-ray

The acclaimed film is headed for Blu-ray in April.

In an early announcement to retailers, Lionsgate is preparing 'A Most Violent Year' for Blu-ray on April 7.

A thriller set in New York City during the winter of 1981, statistically one of the most violent years in the city's history, and centered on a the lives of an immigrant and his family trying to expand their business and capitalize on opportunities as the rampant violence, decay, and corruption of the day drag them in and threaten to destroy all they have built.

Specs have yet to be revealed, but supplements will include: Audio Commentary with Writer/Director J.C. Chandor and Producers Neal Dodson and Anna Gerb, "Behind the Violence" featurette, "A Conversation with Jessica Chastain and Oscar Isaac" featurette, "The Contagious Nature of Violence: The Origins of A Most Violent Year" featurette, Deleted Scenes, "Inner City Crew" Outtakes, and "We Can Cure Violence" Public Service Announcement.

You can find the latest specs for 'A Most Violent Year' linked from our Blu-ray Release Schedule, where it is indexed under April 7. 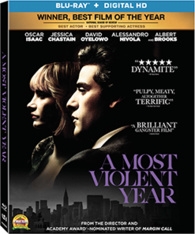