The comedy starring Sam Rockwell, Amy Ryan, and Jemaine Clement is planned for Blu-ray in March.

In an early announcement to retailers, Lionsgate will be releasing 'Don Verdean' on Blu-ray on March 1.

From the writers of Napoleon Dynamite and Nacho Libre comes a comedy of biblical proportions. Hired by an ambitious small-town pastor to find sacred relics in the Holy Land, a self-proclaimed biblical archaeologist comes up short and his attempt to cover up his failure fuels a comic conspiracy.

The Blu-ray will feature 1080p video, lossless 5.1 audio, and supplements include: "Digging In: Behind the Scenes of Don Verdean" Featurette; "Behind the Sounds" Featurette; and Audio Commentary with Director Jared Hess.

You can find the latest specs for 'Don Verdean' linked from our Blu-ray Release Schedule, where it is indexed under March 1. 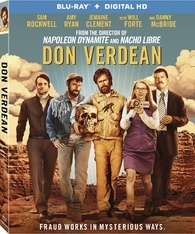