James Ponsoldt's 'The End of the Tour' Bound for Blu-ray

In an early announcement to retailers, Lionsgate has revealed 'The End of the Tour' is headed for Blu-ray on November 3.

A warm, winning road-trip movie that follows journalist David Lipsky (Eisenberg) as he interviews legendary author David Foster Wallace (Segel), The End of the Tour explores friendship, fame, and creative rivalry through two people on a journey that is as moving as it is unforgettable.

The Blu-ray will feature 1080p video, a lossless 5.1 soundtrack, and supplements include: Audio Commentary by Director James Ponsoldt, Screenwriter Donald Margulies, and Actor Jason Segel; "Behind the Tour" Featurette; A Conversation with Composer Danny Elfman; and Deleted Scenes.

You can find the latest specs for 'The End of the Tour' linked from our Blu-ray Release Schedule, where it is indexed under November 3. 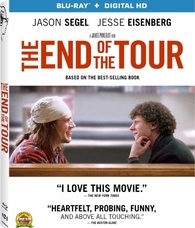