Ian McKellen is 'Mr. Holmes' on Blu-ray this November

The game is once again afoot when Sherlock Holmes comes out of retirement later this year.

In an early announcement to retailers, Lionsgate will be releasing 'Mr. Holmes' on Blu-ray on November 10.

See the world's most famous detective as you've never seen him before, portrayed by acting legend Ian McKellen, in this ingeniously plotted suspense-thriller. For thirty years, Sherlock Holmes has been haunted by his final case, one that remains unsolved. Now, spurred by a mysterious trip to Japan, Holmes quietly slips out of retirement to confront the ghosts of his past-and a spellbinding mystery that will take all of his deductive powers to solve.

You can find the latest specs for 'Mr. Holmes' linked from our Blu-ray Release Schedule, where it is indexed under November 10. 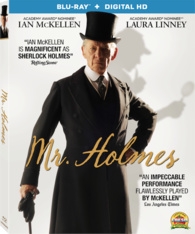