The powerful 4-part 2016 miniseries arrives on Blu-ray in August.

In an early announcement to retailers, Lionsgate has revealed 'Roots' will be available on Blu-ray on August 23.

The classic story of Roots is retold in this miniseries based on Alex Haley's 1976 novel. The show paints a portrait of American slavery through the journey of a family that has a will to survive through many hardships. Malachi Kirby stars as Kunta Kinte, a proud and educated young man who uses those traits to empower himself when he is captured and sold into slavery. While he is enslaved, he challenges his fellow slaves to fight for their freedom as he continues working toward achieving his dream of escaping and returning to his homeland of The Gambia.

The Blu-ray will feature 1080p video, a lossless 5.1 soundtrack, and supplements include Roots: A History Revealed documentary.

You can find the latest specs for 'Roots' linked from our Blu-ray Release Schedule, where it is indexed under August 23. 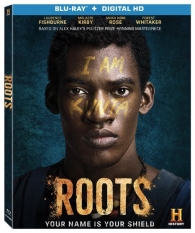