Sarik Andreasyan's crime thriller will be available on Blu-ray in September.

In an early announcement to retailers, Lionsgate will be releasing 'American Heist' on Blu-ray on September 8.

James (Christensen) owes his life to his older brother Frankie (Brody) after taking the rap for a crime they committed together. Now, Frankie is released and back on the streets with no money and no place to go. He turns to his underworld connections and convinces James to join him in hopes that one last job will be the solution to change both their lives.

The Blu-ray will feature 1080p video, lossless 5.1 audio, and supplements include "Creating a Complex Caper: Pulling off American Heist" featurette.

You can find the latest specs for 'American Heist' linked from our Blu-ray Release Schedule, where it is indexed under September 8. 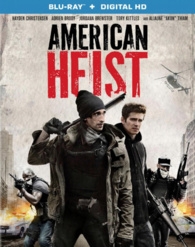