Ciaran Donnelly and Stephen Kay's drama headed to Blu-ray in December now has been upgraded to a combo pack with lossless audio.

As previously reported, Lionsgate and The Discovery Channel will release 'Harley and the Davidsons' on Blu-ray on December 13.

The Blu-ray/DVD/Digital Copy combo pack will feature 1080p video, a lossless 5.1 soundtrack, and supplements include a behind-the-scenes featurette and the “Biketacular” Special. 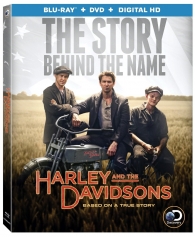