Get Ready to Laugh with 'Shaun the Sheep' on Blu-ray

The hilarious animated feature from Aardman (the producers of Chicken Run and Wallace & Gromit) is planned for Blu-ray in November.

In an early announcement to retailers, Lionsgate will be releasing 'Shaun the Sheep' on Blu-ray on November 24.

MEET SHAUN! He's a little sheep with big dreams, and lately, life on Mossy Bottom Farm has become a bit dull. When Shaun takes the day off for some fun in the Big City, he gets a lot more action than he bargained for. Now Shaun and his flock must use their wits to hatch a baaaa-rilliant plan to get back home in an adventure the whole family will love.

You can find the latest specs for 'Shaun the Sheep' linked from our Blu-ray Release Schedule, where it is indexed under November 24. 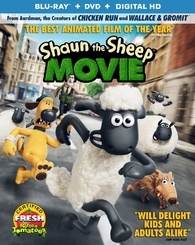