In an early announcement to retailers, Lionsgate will be releasing 'Get a Job' on Blu-ray on June 14.

A group of recent college graduates vie for jobs during a recession, and realize they will need to dial back their expectations of success in this comedy from director Dylan Kidd (Roger Dodger). Meanwhile, a hip barrista (Mimi Gianopulos) befriends a laid off worker (Bryan Cranston) whose jobless status has dealt a devastating blow to his sense of self-confidence. Anna Kendrick, Jay Pharoah, and Miles Teller co-star.

The Blu-ray will feature 1080p video, lossless 5.1 audio, and supplements include: Video Résumé Outtakes and "Where it All Began: the Cast of Get a Job" Featurette.

You can find the latest specs for 'Get a Job' linked from our Blu-ray Release Schedule, where it is indexed under June 14. 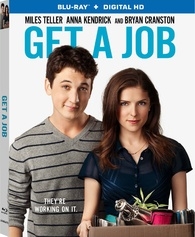