The film starring Ewan McGregor, Jennifer Connelly, and Dakota Fanning will be available on Blu-ray in February.

In an early announcement to retailers, Lionsgate is preparing 'American Pastoral' for Blu-ray on February 7.

Ewan McGregor directs and stars alongside Jennifer Connelly and Dakota Fanning in this acclaimed film adapted from Philip Roth's Pulitzer Prize-winning novel. Seymour "Swede" Levov (McGregor), a once-legendary high school athlete, is a successful businessman married to a former beauty queen, Dawn (Connelly). When Swede and Dawn's daughter (Fanning) disappears after being accused of a violent crime, Swede's perfect life is broken forever and he is left to make sense out of the chaos.

The release will feature 1080p video, a lossless 5.1 soundtrack, and supplements include: Audio Commentary by Ewan McGregor; "American Pastoral: Adapting an American Classic" Featurette; and "Making the American Dream" Featurette.

You can find the latest specs for 'American Pastoral' linked from our Blu-ray Release Schedule, where it is indexed under February 7. 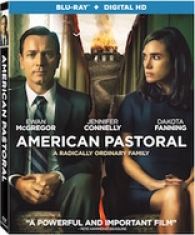