Edie Falco is Back On-Call in February with 'Nurse Jackie: Season Six'

The sixth season of the comedy series arrives on Blu-ray in February.

In an early announcement to retailers, Sony will be releasing 'Nurse Jackie: Season Six' on Blu-ray on February 10.

Jackie realizes that sobriety is the ultimate cover for getting high, and now she's saving lives at work, taking care of her kids and her boyfriend loves the new her. She's got everyone fooled, but what goes up must come down.

You can find the latest specs for 'Nurse Jackie: Season Six' linked from our Blu-ray Release Schedule, where it is indexed under February 10. 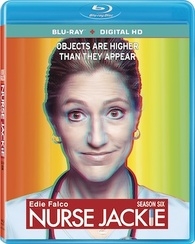