The film starring Michael Fassbender and Kodi Smit-McPhee will hit Blu-ray this summer.

In an early announcement to retailers, Lionsgate is preparing to bring 'Slow West' to Blu-ray on July 7.

In search of his fugitive girlfriend and her father, 16-year-old Jay (Kodi Smit-McPhee) heads west across the 19th-century American wilderness. Along the way, Jay meets Silas (Michael Fassbender), a mysterious traveler who protects him from the savage and lawless elements. But is Silas really watching out for Jay...or is he tied to the band of desperados tracking them? Every step west brings Jay closer to the truth-leading to an epic, bullet-laced showdown in this quintessential Western.

Specs haven't been revealed yet, but supplements include a making of featurette and deleted scenes.

You can find the latest specs for 'Slow West' linked from our Blu-ray Release Schedule, where it is indexed under July 7. 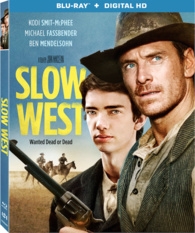