The comedy starring Mike Epps arrives on Blu-ray in August.

As previously reported, Lionsgate will be bringing 'Meet the Blacks' to Blu-ray on August 2.

In a send-up of the hit franchise The Purge, Carl Black moves his family to Beverly Hills in hope of a better life, but their arrival coincides with the city’s annual purge, where all crime is legal for twelve hours.

The Blu-ray will feature 1080p video, a lossless 5.1 soundtrack, and supplements include: The Making of Meet the Blacks; "Hit the Gas" Music Video; Behind the Scenes of "Hit the Gas"; "Don't Hate Wiring!" Parody Commercial; and Outtakes.

You can find the latest specs for 'Meet the Blacks' linked from our Blu-ray Release Schedule, where it is indexed under August 2. 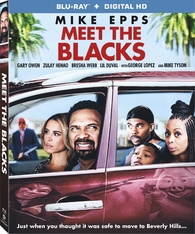