The comedy starring Johnny Depp is coming to Blu-ray in May. Pre-orders are now live.

In an early announcement to retailers, Lionsgate is preparing 'Mortdecai' for Blu-ray on May 12.

After a priceless painting is stolen, shady art dealer Charlie Mortdecai (Johnny Depp) is recruited by an old rival (Ewan McGregor) to get it back. Mortdecai questions his rival's intentions, but takes the job for the money and to keep his high-maintenance wife (Gwyneth Paltrow) happy. With the help of his manservant (Paul Bettany), Mortdecai must face terrorists, angry Russians and more in a hilarious globe-trotting chase.

You can find the latest specs for 'Mortdecai' linked from our Blu-ray Release Schedule, where it's indexed under May 12. 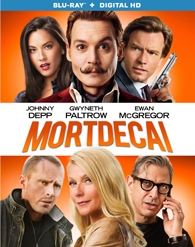 Discs mentioned in this article: (Click for specs and reviews)
Mortdecai (Blu-ray)