As previously reported, Lionsgate will be releasing 'Dragon Blade' on Blu-ray on December 22.

When corrupt Roman leader Tiberius (Adrien Brody) arrives with a giant army to claim the Silk Road, Huo An (Jackie Chan) and his group of trained warriors teams up with an elite legion of defected Roman soldiers, led by General Lucius (John Cusack), to maintain the delicate balance of power in the region. To protect his country and his new friends, Huo An gathers the warriors of thirty-six ethnic nations together to fight Tiberius in an incredible, epic battle.

The Blu-ray will feature 1080p video, lossless 5.1 audio, and supplements include: "Behind the Scenes of Dragon Blade" Featurette; Extended Interviews with Cast & Crew; and Music Videos featuring Jackie Chan.

You can find the latest specs for 'Dragon Blade' linked from our Blu-ray Release Schedule, where it is indexed under December 22. 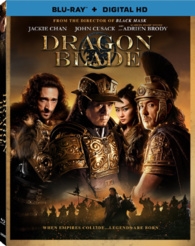