This modern reimagining of Shakespeare's play is coming to Blu-ray in May, and you can pre-order the movie now.

In an early announcement to retailers, Lionsgate is preparing 'Cymbeline' for Blu-ray on May 19.

Specs have not been detailed yet, but supplements will include: "Behind the Scenes of Cymbeline" featurette; Extended Interviews with Cast and Crew; and Audio Commentary with Screenwriter/Director Michael Almereyda, Actor Ethan Hawke and Anthony Holden.

You can find the latest specs for 'Cymbeline' linked from our Blu-ray Release Schedule, where it's indexed under May 19. 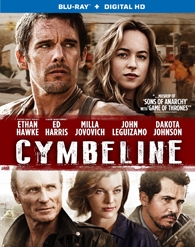 Discs mentioned in this article: (Click for specs and reviews)
Cymbeline (Blu-ray)