'Come and Find Me' Blu-ray Bound

Aaron Paul is on the hunt this January on Blu-ray.

In an early announcement to retailers, Lionsgate is working on 'Come and Find Me' for Blu-ray on January 17.

David and Claire’s idyllic relationship comes to an abrupt and mysterious end after Claire disappears without a trace. Devastated but incapable of letting go, David follows Claire's trail down a frantic and increasingly dangerous path. Shocked at discovering Claire was living a double life, David is forced to risk everything if he ever wants to see her again.

The release will feature 1080p video, lossless 5.1 audio, and supplements include: Unravelling the Mysteries of Come and Find Me Featurette; and Filmmaker Commentary with Writer/Director Zack Whedon and Producer Chris Ferguson.

You can find the latest specs for 'Come and Find Me' linked from our Blu-ray Release Schedule, where it is indexed under January 17. 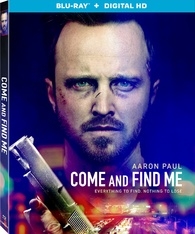