Colm McCarthy's 'The Girl with All the Gifts' Blu-ray Bound

In an early announcement to retailers, Lionsgate is working on 'The Girl with All the Gifts' for Blu-ray on April 25.

Humanity has been all but destroyed by a fungal disease that eradicates free will and turns its victims into flesh eating "hungries." Only a small group of children seems immune to its effects. At an army base in rural England, these unique children are being studied and subjected to cruel experiments. When the base falls, one little girl escapes and must discover what she is, ultimately deciding both her own future and that of the human race.

The Blu-ray will feature 1080p video, lossless audio, and supplements include: Unwrap the Secret World of The Girl with All the Gifts - Featurette.

You can find the latest specs for 'The Girl with All the Gifts' linked from our Blu-ray Release Schedule, where it is indexed under April 25. 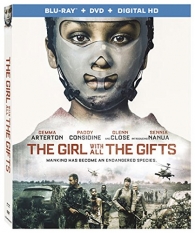