The action-thriller will gun down Blu-ray in February. You can order it now!

In an early announcement to retailers, Lionsgate will be releasing 'John Wick' on Blu-ray on February 3.

An ex-hitman comes out of retirement to track down the gangsters that took everything from him. With New York City as his bullet-riddled playground, "John Wick" (Reeves) is a fresh and stylized take on the "assassin genre."

The Blu-ray will feature 1080p video, a Dolby Atmos soundtrack, and supplements include: An Audio Commentary and six featurettes - Don't F^#% with John Wick, Calling In The Calvalry, Destiny Of A Collective, Assassin's Code, Red Circle, and NYC Noir.

You can find the latest specs for 'John Wick' linked from our Blu-ray Release Schedule, where it is indexed under February 3. 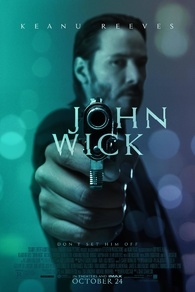