Catherine Hardwicke's 'Miss You Already' Dated and Detailed for Blu-ray

In an early announcement to retailers, Lionsgate will be releasing 'Miss You Already' on Blu-ray on March 1.

Milly (Toni Collette) is the woman who has everything: a successful career, a rock-star husband, and two beautiful children. Her best friend is Jess (Drew Barrymore), who works in a community garden, lives in a boathouse with her boyfriend Jago, and desperately wants a baby. Friends since childhood, Jess and Milly can't remember a time when they didn't share everything - secrets, clothes, even boyfriends. Their differences act as the glue binding them together. That is, until Milly is hit with the life-changing news that she has breast cancer, and needs Jess's support more than ever. As Jess tries to balance her own life, as well as be there for Milly, it's only a matter of time before the pressure on their bond takes its toll.

The Blu-ray will feature 1080p video, a lossless 5.1 soundtrack, and supplements include: Deleted Scenes with Optional Director Commentary; "With Love: Making Miss You Already" Featurette; "There's a Place" Music Video by The All-American Rejects; On-Set Selfies; Filmmaker Commentary; and A Director's Lookbook of Milly's Party.

You can find the latest specs for 'Miss You Already' linked from our Blu-ray Release Schedule, where it is indexed under March 1. 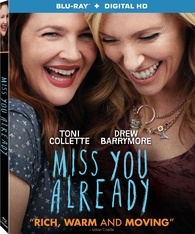