The thriller starring Adrien Brody and Yvonne Strahovski is headed for Blu-ray in August.

In an early announcement to retailers, Lionsgate is working on 'Manhattan Night' for Blu-ray on August 2.

Porter Wren is a Manhattan tabloid writer with an appetite for scandal. On the beat he sells murder, tragedy, and anything that passes for the truth. At home, he is a dedicated husband and father. But when Caroline, a seductive stranger asks him to dig into the unsolved murder of her filmmaker husband Simon, he is drawn into a very nasty case of sexual obsession and blackmail--one that threatens his job, his marriage, and his life.

Specs have yet to be revealed, but supplements include: Audio Commentary with Director/Producer/Screenwriter Brian DeCubellis, Actor/Co-Producer Campbell Scott, and Cinematographer David Tumblety; Behind the Scenes with Cast & Crew; "The Watcher" Featurette; Deleted/Extended Scenes; and Director's Notebook and Storyboards.

You can find the latest specs for 'The last supper' linked from our Blu-ray Release Schedule, where it is indexed under August 2. 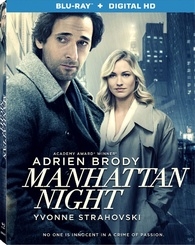