The film starring Bruce Willis, Thomas Jane, and Ambyr Childers is planned for Blu-ray in March.

In an early announcement to retailers, Lionsgate says 'Vice' will be released on Blu-ray on March 17.

Julian Michaels (Bruce Willis) has designed the ultimate resort: VICE, where anything goes and the customers can play out their wildest fantasies with artificial inhabitants who look, think and feel like humans. When an artificial (Ambyr Childers) becomes self-aware and escapes, she finds herself caught in the crossfire between Julian's mercenaries and a cop (Thomas Jane) who is hell-bent on shutting down Vice, and stopping the violence once and for all.

The Blu-ray will feature 1080p video, Dolby Atmos audio, and supplements will include: Audio Commentary with Director Brain A. Miller and Actors Ambyr Childers and Brain Greenberg; Behind The Scenes of 'VICE'; Cast And Crew Interviews; and Trailer Gallery.

You can find the latest specs for 'Vice' linked from our Blu-ray Release Schedule, where it is indexed under March 17. 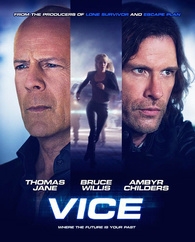