Another Vestron Video favorite is planned for Blu-ray in January.

In an early announcement to retailers, Lionsgate is preparing 'Parents' for Blu-ray on January 31.

Meet the Laemles- and taste the terror in this black comedy, Dad's (Randy Quaid) got a great job, Mom (Mary Beth Hurt) has all the modern conveniences a happy homemaker could ask for, and ten-year-old Michael (Brian Madorsky) has neat new friends and two parents that kill him with kindness. They're the all-American family of 1954...with one small exception.

You can find the latest specs for 'Parents' linked from our Blu-ray Release Schedule, where it is indexed under January 31. 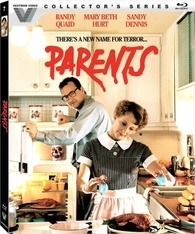