Pre-order your copy of the Blu-ray now.

In an early announcement to retailers, Lionsgate says 'The Hunger Games: Mockingjay Part 1' will be coming to Blu-ray in the coming months.

The worldwide phenomenon of The Hunger Games continues to set the world on fire with The Hunger Games: Mockingjay - Part 1, which finds Katniss Everdeen (Jennifer Lawrence) in District 13 after she literally shatters the games forever. Under the leadership of President Coin (Julianne Moore) and the advice of her trusted friends, Katniss spreads her wings as she fights to save Peeta (Josh Hutcherson) and a nation moved by her courage.

You can find the latest specs for 'The Hunger Games: Mockingjay Part 1' linked from our Blu-ray Release Schedule, where it is indexed under PENDING. 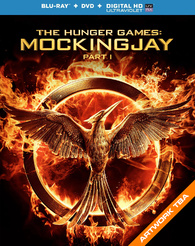