The drama about The Beach Boys' Brian Wilson is headed for Blu-ray this fall.

In an early announcement to retailers, Lionsgate will be releasing 'Love & Mercy' on Blu-ray on September 15.

Love & Mercy is an unconventional portrait of Brian Wilson (portrayed by both John Cusack and Paul Dano), singer and songwriter for The Beach Boys. The film intimately examines the unique journey and ultimate salvation of this musical icon, whose success came at an extraordinary personal cost.

Specs haven't been revealed yet, but supplements include: A California Story: Creating the Look of Love & Mercy" Featurette; "A-Side/B-Side: Portraying the Life of Brian Wilson" Featurette; Deleted Scenes; and Audio Commentary with director/producer Bill Pohlad and executive producer/co-writer Oren Moverman.

You can find the latest specs for 'Love & Mercy' linked from our Blu-ray Release Schedule, where it is indexed under September 15. 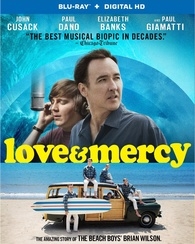