The award-winning drama will arrive on Blu-ray later this month.

In an early announcement to retailers, Lionsgate is preparing 'Moonlight' for Blu-ray on February 28.

A timeless story of human connection and self-discovery, Moonlight chronicles the life of a young black man from childhood to adulthood as he struggles to find his place in the world while growing up in a rough neighborhood of Miami. Anchored by extraordinary performances from a tremendous ensemble cast, Moonlight is profoundly moving portrayal of the moments, people, and unknowable forces that shape our lives and make us who we are.

You can find the latest specs for 'Moonlight' linked from our Blu-ray Release Schedule, where it's indexed under February 28. 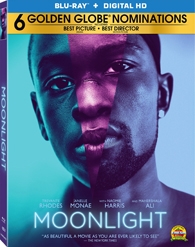 Discs mentioned in this article: (Click for specs and reviews)
Moonlight (Blu-ray)