The Amy Winehouse documentary is planned for Blu-ray this December.

In an early announcement to retailers, Lionsgate will be releasing 'Amy' on Blu-ray on December 1.

From the award-winning director of Senna, and featuring raw footage of Winehouse, this "extraordinary, powerful" (Indiewire) film is the best-performing box office biographical documentary to date this year, and features never-before-seen footage of the talented singer (including collaborations with her musical idol Tony Bennett and producer Mark Ronson) along with interviews with her closest friends and family, as well as previously unreleased music recordings. Certified Fresh by Rotten Tomatoes, this intimate, shocking, and brilliant film was a Cannes Film Festival Official Selection, and was released theatrically in 2015 by A24.

You can find the latest specs for 'Amy' linked from our Blu-ray Release Schedule, where it is indexed under December 1. 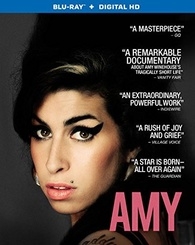