The thriller from director Steven C. Miller is heading to Blu-ray in March.

In an early announcement to retailers, Lionsgate is preparing 'Arsenal' for Blu-ray on March 28.

Family loyalty is tested in this ferocious thriller about a successful businessman (Adrian Grenier) willing to do anything for his deadbeat brother (Johnathon Schaech) – including tracking down the vicious mobster (Nicolas Cage) holding him hostage.

You can find the latest specs for 'Arsenal' linked from our Blu-ray Release Schedule, where it's indexed under March 28. 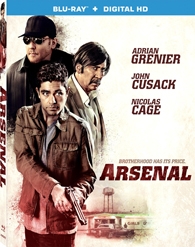 Discs mentioned in this article: (Click for specs and reviews)
Arsenal (Blu-ray)